Clicking the orange button below will start our PDF editor. The editor enables one to complete the va form 27 2008 with ease. The software provides a versatile toolbar that will enable you to edit PDF files. You can do it on any device, anywhere anytime! Va Form 27 2008 is a document used to apply for veteran's benefits. The form can be submitted online or by mail, and is generally processed within a few weeks. Veterans may be eligible for a range of benefits, including disability compensation, death benefits, education assistance, and health care. Prior to submitting your application, be sure to carefully read the eligibility requirements and gather all the required documentation.

You will see details about the type of form you want to submit in the table. It will tell you the time it will need to finish va form 27 2008, what parts you will need to fill in, etc. 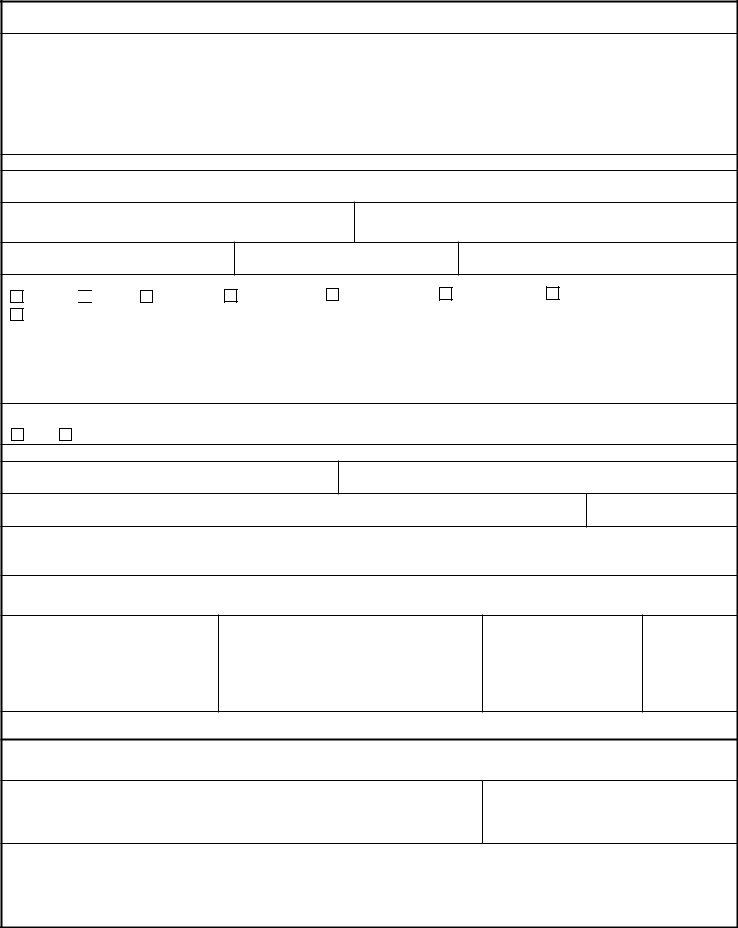 PRIVACY ACT NOTICE: VA will not disclose information collected on this form to any source other than what has been authorized under the Privacy Act of 1974 or Title 38, Code of Federal Regulations 1.576 for routine uses (i.e., civil or criminal law enforcement, congressional communications, epidemiological or research studies, the collection of money owed to the United States, litigation in which the United States is a party or has an interest, the administration of VA programs and delivery of VA benefits, verification of identity and status, and personnel administration) as identified in the VA system of records, 58VA21/22/28, Compensation, Pension, Education, and Vocational Rehabilitation and Employment Records - VA, published in the Federal Register. Your obligation to respond is required to obtain or retain benefits. Giving us the veteran's SSN account information is voluntary. Refusal to provide the veteran's SSN by itself will not result in the denial of benefits. VA will not deny an individual benefits for refusing to provide his or her SSN unless the disclosure of the SSN is required by a Federal Statute of law in effect prior to January 1, 1975, and still in effect. The requested information is considered relevant and necessary to determine entitlement to benefits under the law. The responses you submit are considered confidential (38 U.S.C. 5701). Information submitted is subject to verification through computer matching programs with other agencies.

RESPONDENT BURDEN: We need this information to determine eligibility for issuance of a burial flag to a family member or friend of a deceased veteran (38 U.S.C. 2301). Title 38, United States Code, allows us to ask for this information. We estimate that you will need an average of 15 minutes to review the instructions, find the information, and complete this form. VA cannot conduct or sponsor a collection of information unless a valid OMB control number is displayed. You are not required to respond to a collection of information if this number is not displayed. Valid OMB control numbers can be located on the OMB Internet Page at www.reginfo.gov/public/do/PRAMain. If desired, you can call to get information on where to send comments or suggestions about this form.

IMPORTANT - Postmaster or other issuing official: Submit this form to the nearest VA regional office.

INFORMATION ABOUT THE DECEASED VETERAN (Complete as much as possible)

(Information provided is considered essential when applying for other VA benefits.)

2.MAIDEN NAME OR OTHER NAME(S) VETERAN USED WHILE ON ACTIVE DUTY

13.HAS DOCUMENTATION BEEN PRESENTED OR ATTACHED THAT SHOWS THE VETERAN MEETS THE ELIGIBILITY CRITERIA? (See Paragraphs C, D, and E of the "Instructions")

INFORMATION ABOUT THE FLAG RECIPIENT AND APPLICANT

14A. NAME OF PERSON ENTITLED TO RECEIVE FLAG

14B. RELATIONSHIP OF DECEASED VETERAN (See Paragraph F of the "Instructions")

I CERTIFY that the statements made in this document are true and complete to the best of my knowledge. I further certify that the deceased veteran is eligible, in accordance with the attached instructions, for issue of a United States flag for burial purposes, and such flag has not been previously applied for or furnished.

17.ADDRESS OF APPLICANT (Number and street or rural route, city or P.O., and ZIP Code)

PENALTY - The law provides that whoever makes any statement of a material fact knowing it to be false shall be punished by a fine, imprisonment, or both.

The completed VA Form will be forwarded within 3 business days to:

A. How can I contact VA if I have questions?

If you have questions about this form, how to fill it out, or about benefits, contact your nearest VA regional office. You can locate the address of the nearest regional office in your telephone book blue pages under "United States Government, Veterans" or call (Hearing Impaired TDD relay line is 711). You may also contact VA by Internet at https://iris.custhelp.va.gov/.

B. How do I apply for a burial flag?

Complete VA Form and submit it to a funeral director or a representative of the veteran or other organization having charge of the funeral arrangements or acting in the interest of the veteran. You may get a flag at any VA regional office or U.S. Post Office. When burial is in a national, State or military post cemetery, a burial flag will be provided.

D. Who is not eligible for a burial flag? (Continued)

C. Who is eligible for a burial flag?

Veterans who were entitled to retired pay for service in the reserves, or would have been entitled to such pay but not for being under 60 years of age.

Members or former members of the Selected Reserve (Army, Air Force, Coast Guard, Marine Corps, or Naval Reserve; Air National Guard; or Army National Guard) who served at least one enlistment or, in the case of an officer, the period of initial obligation, or were discharged for disability incurred or aggravated in line of duty, or died while a member of the Selected Reserve.

D. Who is not eligible for a burial flag?

Veterans who received a dishonorable discharge.

•Members of the Selected Reserve whose last discharge from service was under conditions less favorable than honorable.

•Peacetime veterans who were discharged before June 27, 1950 and did not serve at least one complete enlistment or incur or aggravate a disability in the line of duty.

•Discharged or rejected draftees, or members of the National Guard, who reported to camp in answer to the President's call for World War I service but who, when medically examined, were not finally accepted for military service.

•Persons who were discharged from World War I service prior to November 12, 1918, on their own application or solicitation by reason of being an alien, or any veterans discharged for alienage during a period of hostilities.

E. What documentation is required in order to receive a burial flag?

Provide a copy of the veteran's discharge documents that shows service dates and the character of service, such as DD Form 214, or verification of service from the veteran's service department or VA. Various information requested, is considered essential to the proper processing of the application. Ensure these areas are completed as fully as possible. Note: If the claimant is unable to provide documentary proof, a flag may be issued when a statement is made by a person of established character and reputation that he/she personally knows the deceased to have been a veteran who meets the eligibility criteria.

F. Who is eligible to receive a burial flag?

•children, according to age

•others, such as cousins or grandparents

Note: When there is no VA will furnish the flag to a friend making a request for it. If there is no living relative or one cannot be located, and no friend requests the flag, it must be returned to the nearest VA facility.

Note: The flag cannot be replaced if it is lost, destroyed, or stolen. Additionally, a flag may not be issued after burial unless it was impossible to obtain a flag in time to drape the casket or accompany the urn before burial. If the or friend is requesting the flag after the veteran's burial, he or she must personally sign the application and explain in Item 15 "Remarks" the reason that prevented timely application for a burial flag. 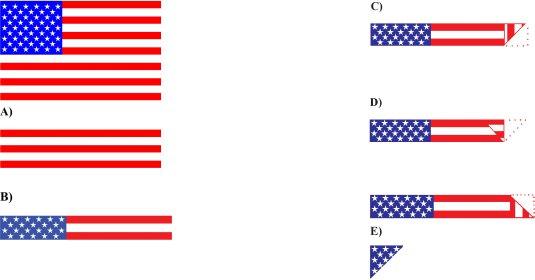 USE OF THE FLAG

1.This flag is issued on behalf of the Department of Veterans Affairs to honor the memory of one who has served our country.

2.When used to drape the casket, the flag should be placed as follows:

(a)Closed Casket - When the flag is used to drape a closed casket, it should be so placed that the union (blue field) is at the head and over the left shoulder of the deceased.

(b)Half Couch (Open) - When the flag is used to drape a casket, it should be placed in three layers to cover the closed half of the casket in such a manner that the blue field will be the top fold, next to the open portion of the casket on the deceased's left.

(c)Full Couch (Open) - When the flag is used to drape a casket, it should be folded in a triangular shape and placed in the center part of the head panel of the casket cap, just above the left shoulder of the deceased.

3.During a military commitment ceremony, the flag which was used to drape the casket is held waist high over the grave by the pallbearers and, immediately after the sounding of "Taps," is folded in accordance with the illustration below.

4.Folding the flag (see illustration below):

5.The flag should not be lowered into the grave or allowed to touch the ground. When taken from the casket, it should be folded as shown (see illustration).

7.The flag should never be fastened, displayed, used, or stowed in such a manner as will permit it to be easily torn, soiled, or damaged in any way.

8.The flag should never have placed upon it, nor any part of it, nor attached to it, any mark, insignia, letter, word, figure, design, picture, or drawing of any nature.

9.The flag should never be used as a receptacle for receiving, holding, carrying, or delivering anything.

10.The flag, when badly worn, torn, or soiled should no longer be publicly displayed, but privately destroyed by burning in such a manner as to convey no suggestion of disrespect or irreverence.

(A)Straighten out the flag to full length and fold lengthwise once, folding the lower striped section of the flag over the blue field.

(B)Fold the flag lengthwise a second time to meet the open edge, making sure that the union of stars on the blue field remains outward in full view.

(C)A triangular fold is then started by bringing the striped corner of the folded edge to the open edge.

(D)The outer point is then turned inward, parallel with the open edge to form a second triangle.

(E)The diagonal or triangular folding is continued toward the blue union until the end is reached, with only the blue showing and the form being that of a cocked (three corner) hat.