Form DTF 803 is a summary of an individual's work experience. It is generally used to provide proof for insurance claims, unemployment benefit claims and other similar situations where proof of employment is required.

Our tool is simple and safe. Press the orange button down below to start editing your this form file. Editing may be accomplished on any device. Form Dtf 803 is a document that is filled out by taxpayers to request a refund for overpaid taxes. The form can be filed electronically or by mail, and it generally takes about eight weeks for the IRS to process the request and issue the refund. In order to complete Form Dtf 803, taxpayers will need their social security number, adjusted gross income from the previous year, total amount of federal income tax withheld, and other relevant information. Form Dtf 803 is an important document to have in case you have overpaid your taxes during the year. Be sure to file it as soon as possible so that you can receive your refund as quickly as possible.

If you wish to first find out how much time you will need to prepare the form dtf 803 and the number of pages it's got, here is some basic data that may be useful. 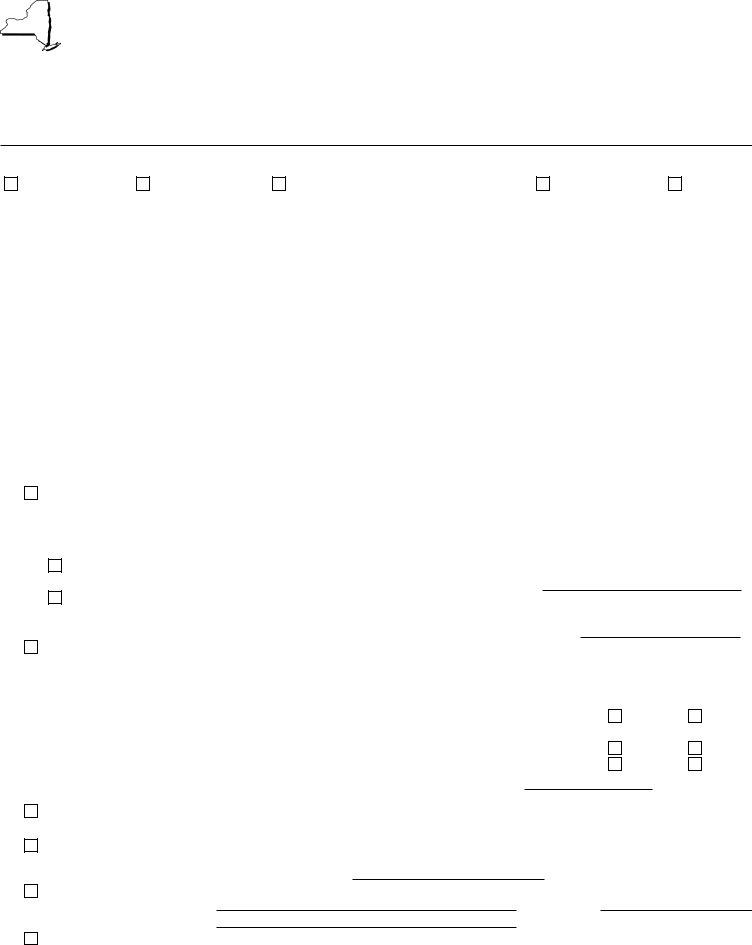 For transactions processed by the Department of Motor Vehicles (DMV) and its agents or county clerk ofices only.

If you are claiming an exemption for a gift, use Form Statement of Transaction – Sale or Gift of Motor Vehicle, Trailer, Vehicle (ATV), Vessel (Boat), or Snowmobile.

Misuse of this exemption claim may subject you to serious civil and criminal sanctions in addition to the payment of any tax and interest due. Print or type clearly.

To claim a sales and use tax exemption on the vehicle listed in Section 1 – Vehicle information, mark an X in the appropriate box below and supply any additional information requested. You must sign Section 5 – Certiﬁcation, and present this completed form (including any additional required information) to the motor vehicle issuing ofﬁce when registering the vehicle.

Nonresident of New York State (NYS) (purchases of motor vehicles, trailers, or boats only) — At the time of purchase the purchaser was not a resident of NYS, did not have a place of abode in NYS, and was not engaged in any trade business, employment, or profession in NYS. See Publication 750, A Guide to Sales Tax in New York State, for more information on what is considered a place of abode.

(Mark an X in one of the boxes below; go to line 3 and enter required additional information.)

Motor vehicle, trailer, or boat was not purchased in NYS.

If marked, enter the location where the motor vehicle, trailer, or boat was purchased:

Motor vehicle, trailer, or boat was purchased in NYS, but previously registered by the purchaser in another state prior to registering it in NYS.

If marked, enter the state where the motor vehicle, trailer, or boat was previously registered:

Nonresident of NYS (purchase of ATVs or snowmobiles only) — The ATV or snowmobile was delivered to the purchaser outside of NYS. At the time of purchase the purchaser was not a resident of NYS, did not have a place of abode in NYS, and was not engaged in any trade, business, employment, or profession in NYS. (Go to line 3 and enter required additional information.)

3Required additional information (You must provide the information requested below if you marked a box in either line 1 or 2 above.)

Exempt organization — The purchaser is an organization exempt from tax as provided in Tax Law Article 28, section 1116(a).

Settlement of estate — The motor vehicle, trailer, boat, ATV, or snowmobile was acquired in the settlement of the estate of the previous owner, but was not purchased from the estate. 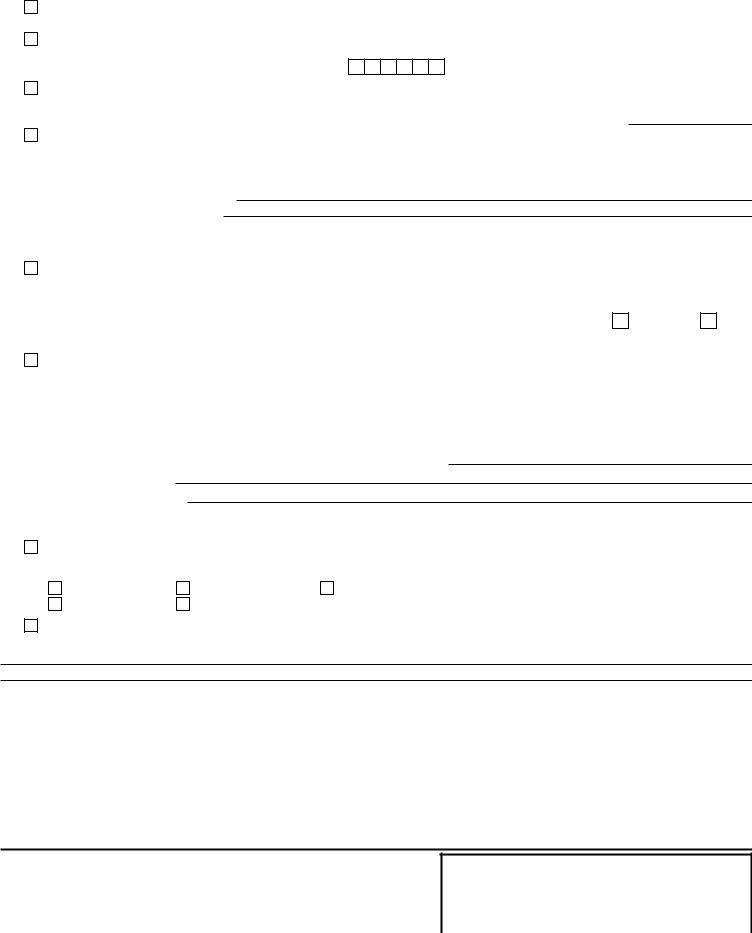 Direct payment (DP) permit holder — The purchaser has a DP permit issued by the Tax Department.

Name of exempt nation or tribe: Name of qualiied reservation:

Mark an X in the appropriate box.

NYS tax exempt (tax paid to another state) — No NYS or local sales or use tax is due if the seller or purchaser paid sales, use, excise, or highway use tax to another state in order to obtain the title. Complete the following:

Note: You must provide military ID or other documentation of military service and attach proof of tax paid to another state. NYS tax deferred — No NYS or local sales or use tax is due at this time if the purchaser:

•has been on active duty continuously since the vehicle was purchased outside NYS;

•is still on active duty and is still stationed outside NYS;

•has not been stationed in, nor had living quarters in, NYS from the time of purchase to the present; and

•will not use the vehicle in NYS except during authorized absence from duty.

Note: upon discharge, separation, or release from active duty, or upon being stationed or quartered within NYS, the purchaser must pay any sales and use tax due if the purchaser continues to use the motor vehicle in NYS.

I certify that the above statements are true, complete, and correct, and that no material information has been omitted. I make these statements and issue this exemption certiicate with the knowledge that this document provides evidence that state and local sales or use taxes do not apply to a transaction or transactions for which I tendered this document and that willfully issuing this document with the intent to evade any such tax may constitute a felony or other crime under New York State Law, punishable by a substantial ine and a possible jail sentence. I understand that the Department of Motor Vehicles

or county clerk is agent for, and acts on behalf of, New York State and any locality with respect to any state or local sales or use tax the Department of Motor Vehicles or county clerk is required to collect from me; that as agent they are required to collect such taxes from me unless I properly furnish this certiicate; and that this certiicate will be made available to the Tax Department. I also understand that the Tax Department is authorized to investigate the

validity of tax exemptions claimed and the accuracy of any information entered on this document.

to 42 USC 405(c)(2)(C)(i). This information will be used to determine and administer tax liabilities and, when authorized by law, for certain tax offset and exchange of tax information programs as well as for any other lawful purpose. Information concerning quarterly wages paid to employees is provided to certain state agencies for purposes of fraud prevention, support enforcement, evaluation of the effectiveness of certain employment and training programs and other purposes authorized by law.

Failure to provide the required information may subject you to civil or criminal penalties, or both, under the

For ofﬁce use only