Yrc Bill Of Lading – Fill Out and Use This PDF

The YRC Bill Of Lading API is available to customers of the courier service. The API enables users to create shipping labels and return commercial invoices for their shipments.

You've discovered the right place if you're looking for this form. Our PDF tool is an online application that allows you to quickly fill in any PDF. You can use just about any device - smartphone, tablet, or laptop. Are you looking for a Yrc bill of lading form? You've come to the right place. Here at our website, we provide government-approved forms for use in a variety of different contexts. Our yrc bill of lading form is perfect for shipping goods by truck or rail. It's easy to use, and it comes complete with all the information you need to get your shipment on its way.

Here is the details concerning the file you were seeking to complete. It will show you the span of time you'll need to fill out yrc bill of lading, what fields you will have to fill in, and so forth. 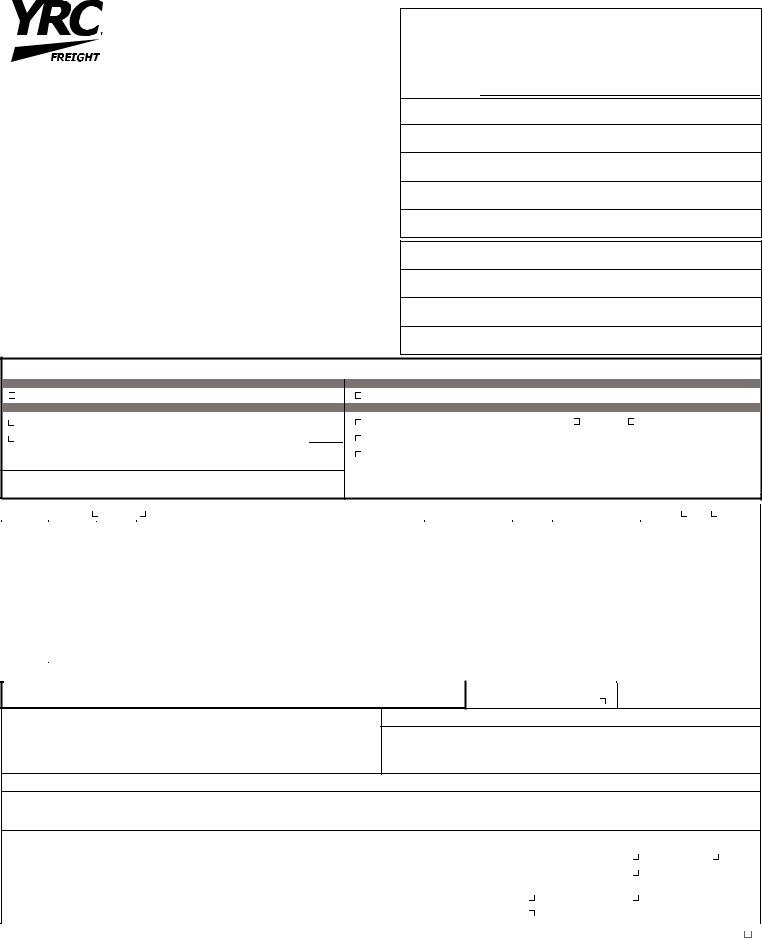 All shipments are subject to individual pricing programs as published by YRC or by written transportation contracts.

Note (3) Products requiring special or additional care or attention in handling or stowing must be so marked and packaged as to ensure safe transportation with ordinary care. See Sec. 2(e) of NMFC item 360.

The carrier may decline to make delivery of this shipment without payment of freight and all other lawful charges.

The property described above is in apparent good order, except as noted (contents and condition of contents of packages unknown), marked, consigned, and destined, as indicated above which said carrier (the word carrier being understood throughout this contract as meaning any person or corporation in possession of the property under the contract) agrees to carry its usual place of delivery of said destination, if on its route, otherwise to deliver to another carrier on the route to said destination.

It is mutually agreed as to each carrier of all or any of said property over all or any portion of said route to destination and as to each party at any time interested in all or any of said property, that every service to be performed hereunder shall be subject to all the conditions not prohibited by law, whether printed or written, herein contained, including the conditions on the back hereof, which are hereby agreed to by the shipper and accepted for himself and his assigns.

I hereby declare that the contents of this consignment are fully and accurately described above by the proper shipping name and are classified, packaged, marked and labeled/placarded and are in all respects in proper condition for transport according to applicable international and national governmental regulations. 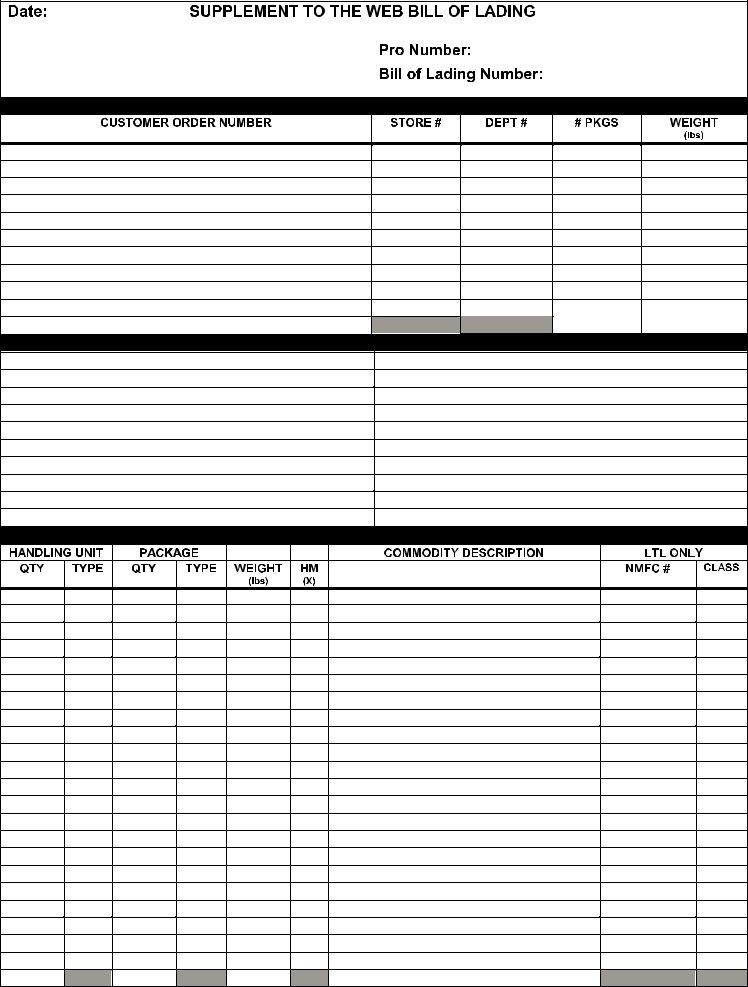 Commodities requiring special or additional care or attention in handling or stowing must be so marked and packaged as to ensure safe transportation with ordinary care.

(a)The carrier or the party in possession of any of the property described in this bill of lading shall be liable as at common law for any loss thereof or damage thereto, except as hereinafter provided.

Unless arranged or agreed upon, in writing, prior to shipment, carrier is not bound to transport a shipment by a particular schedule or in time for a particular market, but is responsible to transport with reasonable dispatch. In case of physical necessity, carrier may forward a shipment via another carrier.

(a)As a condition precedent to recovery, claims must be filed in writing with: any participating carrier having sufficient information to identify the shipment.

(c)Suits for loss, damage, injury or delay shall be instituted against any carrier no later than two years and one day from the day when written notice is given by the carrier to the claimant that the carrier has disallowed the claim or any part or parts of the claim specified in the notice. Where claims are not filed or suits are not instituted thereon in accordance with the foregoing provisions, no carrier shall be liable, and such claims will not be paid.

(d)Any carrier or party liable for loss of or damage to any of said property shall have the full benefit of any insurance that may have been effected, upon or on account of said property, so far as this shall not avoid the policies or contracts of insurance, PROVIDED, that the carrier receiving the benefit of such insurance will reimburse the claimant for the premium paid on the insurance policy or contract.

(a)If the consignee refuses the shipment tendered for delivery by carrier or if carrier is unable to deliver the shipment, because of fault or mistake of the consignor or consignee, the carrier’s liability shall then become that of a warehouseman. Carrier shall promptly attempt to provide notice, by telephonic or electronic communication as provided on the face of the bill of lading, if so indicated, to the shipper or the party, if any, designated to receive notice on this bill of lading. Storage charges, based on carrier’s tariff, shall start no sooner than the next business day following the attempted notification. Storage may be, at the carrier’s option, in any location that provides reasonable protection against loss or damage. The carrier may place the shipment in public storage at the owner’s expense and without liability to the carrier.

(b)If the carrier does not receive disposition instructions within 48 hours of the time of carrier’s attempted first notification, carrier will attempt to issue a second and final confirmed notification. Such notice shall advise that if carrier does not receive disposition instructions within 10 days of that notification, carrier may offer the shipment for sale at a public auction and the carrier has the right to offer the shipment for sale. The amount of sale will be applied to the carrier’s invoice for transportation, storage and other lawful charges. The owner will be responsible for the balance of charges not covered by the sale of the goods. If there is a balance remaining after all charges and expenses are paid, such balance will be paid to the owner of the property sold hereunder, upon claim and proof of ownership.

(c)Where carrier has attempted to follow the procedure set forth in subsections 4(a) and (b) above and the procedure provided in this section is not possible, nothing in this section shall be construed to abridge the right of the carrier at its option to sell the property under such circumstances and in such manner as may be authorized by law. When perishable goods cannot be delivered and disposition is not given within a reasonable time, the carrier may dispose of property to the best advantage.

(d)Where a carrier is directed by consignee or consignor to unload or deliver property at a particular location where consignor, consignee, or the agent of either, is not regularly located, the risk after unloading or delivery shall not be that of the carrier.

(a)In all cases not prohibited by law, where a lower value than the actual value of the said property has been stated in writing by the shipper or has been agreed upon in writing as the released value of the property as determined by the classification or tariffs upon which the rate is based, such lower value plus freight charges if paid shall be the maximum recoverable amount for loss or damage, whether or not such loss or damage occurs from negligence.

(b)No carrier hereunder will carry or be liable in any way for any documents, coin money, or for any articles of extraordinary value not specifically rated in the published classification or tariffs unless a special agreement to do so and a stipulated value of the articles are endorsed on this bill of lading.

Every party, whether principal or agent, who ships explosives or dangerous goods, without previous full written disclosure to the carrier of their nature, shall be liable for and indemnify the carrier against all loss or damage caused by such goods. Such goods may be warehoused at owner’s risk and expense or destroyed without compensation.

(a)The consignor or consignee shall be liable for the freight and other lawful charges accruing on the shipment, as billed or corrected, except that collect shipments may move without recourse to the consignor when the consignor so stipulates by signature or endorsement in the space provided on the face of the bill of lading. Nevertheless, the consignor shall remain liable for transportation charges where there has been an erroneous determination of the freight charges assessed, based upon incomplete or incorrect information provided by the consignor.

(b)Notwithstanding the provisions of subsection (a) above, the consignee’s liability for payment of additional charges that may be found to be due after delivery shall be as specified by 49 U.S.C. §13706, except that the consignee need not provide the specified written notice to the delivering carrier if the consignee is a carrier.

(c)Nothing in this bill of lading shall limit the right of the carrier to require the prepayment or guarantee of the charges at the time of shipment or prior to delivery. If the description of articles or other information on this bill of lading is found to be incorrect or incomplete, the freight charges must be paid based upon the articles actually shipped.

If all or any part of said property is carried by water over any part of said route, such water carriage shall be performed subject to the terms and provisions and limitations of liability specified by the “Carriage of Goods By Sea Act” and any other pertinent laws applicable to water carriers.

END_OF_DOCUMENT_TOKEN_TO_BE_REPLACED

Yrc Bill Of Lading isn’t the one you’re looking for?